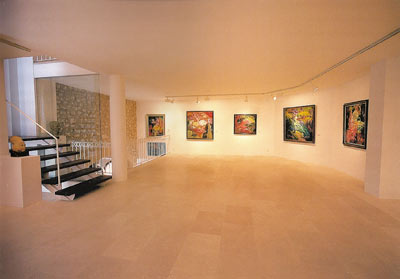 The Dionís Bennàssar Foundation has a clear desire to bring together, conserve and simultaneously disseminate the work of the painter Dionís Bennàssar (1904-1967) and bring it closer to the Mallorcan community, visitors interested in our cultural heritage, and especially, future generations.

The artistic archive of the Foundation is comprised of different collections. The most important is undoubtedly the collection of oils on canvas, of which a large part belongs to the last pictorial stage of the artist Dionís Bennàssar´s output. There is also an extensive collection of watercolours, portraits, drawings and sculptures. The Foundation also maintains the preparatory drawings -that would later become important oil paintings- notebooks, books, photographs and correspondence.

In an instinctive and surprising, direct and endearing, poetic and ironic manner, Dionís Bennàssar offers a chronicle of other places he has visited or that are rooted in his memory. Speaking from his heart, he describes the real world and the people that inhabit it. With emotion and truth, he transforms spaces into places filled with magic suggestions.

The property, which must date from around the 17th century, has been revamped in order to satisfy the needs of its new use. While always respecting the house-museum atmosphere, it recreates how it was and what daily life was like in a typical Mallorcan house and it holds a large part of the mementos that Dionís Bennàssar collected throughout his life, and many of them are in the same room where he left them.

Dionís Bennàssar is the youngest member of an emblematic generation that developed its intellectual and creative powers between the second half of the 19th century and the first half of the 20th century. Their work made Pollensa stand out as the province that united the largest and most important cultural hub.

How to get there »